As an instructor in the application of Res-Q-Jack lifting and stabilization struts, unintended vehicle movement is what I aim to eliminate. I teach a few quick lifts with a wheel resting car. A successful evolution requires a car that can't roll away. I've too often found that we are either short on material to chock the wheels, complacent about chocking wheels, or inadequately chocking wheels. I usually cite a big 6x6 wood cribbing block as one of the means I consider inadequate. I've seen a car simply push such a tall item placed in front or behind wheel. Another example is chocking only one direction and neglecting the direction thought to not be an issue only to soon realize that was a big mistake. I admit I've made that mistake. 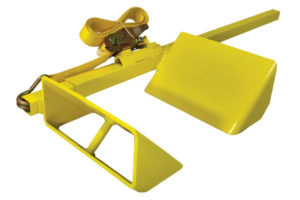 I began to search for a means to better secure wheels from rolling. The commercial option available didn't quite fit what I was looking for and it was far too heavy. I wanted an item that would securely chock a wheel in both directions that would lock and require a user to intentionally release.

The first prototype involved two wedge shaped structures which were connected by telescopic tubes which would allow the user to adjust the distance between the two wedges while maintaining wedge direction and alignment. A ratchet strap mechanism mounted between the two wedges became the means to draw the wedges together and hold position. The model could accommodate small car tires up to large fire truck tires. The problems were weight, an inability to wrap around wheels to keep them from rolling up and out of the opposing wedges on an incline, no means to fix the assembly to the ground to prevent sliding movement, and complicated costly weldments.

These issues were cleared with the latest model. We now have a lightweight wheel chock with a means to capture a wheel within the wedges and a means to drive pickets through the device and into the ground. Concerns of a passenger car rolling or sliding are virtually eliminated with the Res-Q-Jack Ratcheting Wheel Chock otherwise known as the "Ratchock" or "WheeLock".

Posted in News and tagged Stabilization